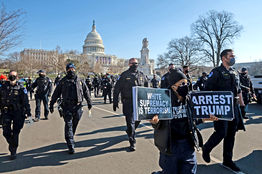 We Don’t Need Another Patriot Act

New law-enforcement powers would inevitably be turned against minorities and progressive dissenters.

Excerpts of the former secretary of state’s contributions to the Journal editorial pages.

What to Do When There’s a Covid-19 Vaccine Glut

Supply is ramping up, but many Americans are reluctant to get the shot and need to be persuaded.

My son and I found kindness alive and well—and offline.

Removal from office is best understood as akin to a ‘mandatory minimum’ sentence for a crime.

For decades, universities have taken advantage of graduates with humanities Ph.D.s and dim prospects.

Biden Tests the Adage ‘The Customer Is Always Right’

I support him, my restaurant has served him, but his minimum-wage proposal would put me out of business.

In the Mideast, Biden Returns to Abnormal

He revives the Obama policy of strengthening America’s enemies and harming its friends.

There’s no good reason to root for either team. So try these dubious ones.

The Best Company Name Is Under Where?

Your child may live to be 100, but a firm can last for centuries.

Tools for stopping variants are limited and, like masks and distancing, vaccines are not a panacea.

From Covid Relief to Big Government

Biden wants to dole out checks and create new programs, not find a compromise.

Rioters looting and taking selfies have nothing on Italy’s ‘Years of Lead.’

The Short March Back to Inflation

Like today, policy makers of the 1960s had bigger worries than prices. Then a spike crushed the economy.

Less than 5% of five million people deemed ‘Palestinian refugees’ meet the criteria for this status.

The Risks of Too Much ‘Stimulus’

Disposable real per capita income rose 5.5% in 2020, the highest rate since 1984, due largely to transfer payments.

IMF ‘special drawing rights’ with no strings are the wrong way to help developing countries.

It censors testimony from physicians on early treatments for Covid-19 patients.