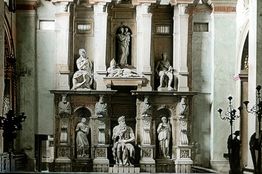 A Burial Beneath Beauty

An outsize Moses dominates the scene in Michelangelo’s Tomb of Pope Julius II.

Sounds From the Future

Arnold Schoenberg’s ‘Pierrot Lunaire’ (‘Moonstruck Pierre’) so defied the melodic conventions of classical music that it initially even perplexed Stravinsky.

Ornately-carved pillars and friezes from a 16th-century South Indian temple bring the stories of the Ramayana and Mahabharata to life.

An Embattled Statue, Under Siege

Vinnie Ream’s sculpture of Abraham Lincoln, which appeared in photos from the recent Capitol riots, has long had its detractors; now the time is ripe for a positive reassessment.

Artist-explorer Albert Bierstadt’s “A Storm in the Rocky Mountains, Mt. Rosalie” looms as large in American cultural history as the towering peaks he depicts.

Blooming Brilliance on a Grand Scale

An Album to Liberate a Genre

‘Free Jazz: A Collective Improvisation by the Ornette Coleman Double Quartet’ was and remains a radical recording thanks to an unencumbered exchange of sonic ideas among a bevy of talented musicians.

A newly finished restoration of the Empire State Building gives us the chance to again appreciate the structure’s glittering brilliance.

Gateway to a Saint’s Story

The 28 reliefs in Andrea Pisano’s doors for the Florence Baptistery depict the Virtues and scenes from the life of John the Baptist.

White’s ‘Stuart Little’ was unique in its departure from the predictable moralism of earlier children’s stories.

On the Road to Abstraction

Jackson Pollock’s ‘Mural’ is a bridge from his representational to his radical work.

Painting of a Provocateur

With his portrait of Félix Fénéon, painter Paul Signac conferred the mantle of genius on a sympathetic critic.

A Holy Trinity of Glittering Beauty

Henry Fuseli’s ‘The Nightmare’ bewitches the observer with its unnerving ambiguity.

A Political Novel for All Eras

Robert Penn Warren’s ‘All the King’s Men’ remains just as insightful about ambition, electioneering and governing as when first published in 1946.

A Sapphire of Tonal Brilliance

Jack Lemmon and Tony Curtis get dolled up to avoid the mob in Billy Wilder’s ‘Some Like It Hot,’ an idiosyncratic comedy that blended slapstick and screwball.

The Poetry of the Prosaic

William Carlos Williams’s ‘The Red Wheelbarrow’ offers an intimately human experience in its consideration of a quotidian scene.

In Wong Kar Wai’s ‘In the Mood for Love,’ when neighbors find out their spouses are having an affair, they strike up a quiet liaison of their own.