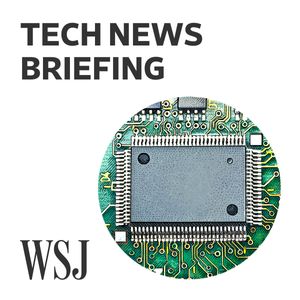 Get the latest in technology news for your weekday commute. The Wall Street Journal's reporters and editors highlight leading companies, new gadgets, consumer trends and cyber issues. From San Francisco to New York to the hottest conferences, our journalists help you stay plugged in.

Tesla and SpaceX CEO Elon Musk hosted "Saturday Night Live" this past weekend. Tesla reporter Rebecca Elliott joins host Amanda Lewellyn to discuss what happened and why the sketch show made the unusual choice to bring him on in the first place.

A new report from the New York attorney general found that nearly 18 million fake comments were filed regarding the Federal Communications Commission's 2017 proposal to scale back internet regulations. Senior writer James Grimaldi joins host Amanda Lewellyn to discuss the finding and what is being done to combat the tactic, known as astroturfing. Christopher Zinsli is our supervising producer. Kateri Jochum is the executive producer of WSJ Podcasts.

Facebook Oversight Board Upholds Trump Ban, With an Asterisk

In a long-anticipated ruling, Facebook's oversight board upheld the company's decision to block former President Donald Trump from its platforms. But it said the company didn't adequately explain if or why the ban would be permanent. Facebook reporter Jeff Horwitz joins host Amanda Lewellyn to discuss the ruling, and its potential impact. News Corp, owner of The Wall Street Journal, has a commercial agreement to supply news through Facebook.

Former President Donald Trump has been banned from Facebook and Instagram since January, after a pro-Trump mob attacked the U.S. Capitol. Today, Facebook's independent oversight board is expected to hand down its decision that could determine whether Mr. Trump is allowed back on the platforms. Facebook reporter Jeff Horwitz joins host Amanda Lewellyn to discuss how the board is making its decision, and what the impact could be. News Corp, owner of The Wall Street Journal, has a commercial agreement to supply news through Facebook.

Leaders at the startup Basecamp said last week it would curb political conversations at work. The announcement sparked an immediate backlash. But it's not the first time a tech company has tried to limit employees' speech. Tech reporter Katie Bindley joins host Amanda Lewellyn to explain why the issue has become so prevalent, and how Basecamp fits in. Dow Jones & Co., publisher of The Wall Street Journal, has a commercial agreement to supply news through Apple services.

The high-profile trial between the maker of 'Fortnite' and Apple begins today. Epic alleges that Apple's developer fees-the 30% commission it takes on purchases made through its App Store-are too high and anticompetitive. Apple says the fees are in line with what others charge and that it uses the money to ensure that transactions made through the App Store are safe. Apple reporter Tim Higgins joins host Amanda Lewellyn to discuss what to watch for. Dow Jones & Co., publisher of The Wall Street Journal, has a commercial agreement to supply news through Apple services.

What We Learned From This Week's Tech Earnings Reports

This week's quarterly earnings reports from some of the biggest tech companies in the world give us a first look at how the sector is faring as the world begins to ease pandemic-related restrictions. Tech editor Bowdeya Tweh joins host Amanda Lewellyn to discuss the results and what we learned. Christopher Zinsli is our supervising producer. Kateri Jochum is the executive producer of WSJ Podcasts.

Google secured one of its largest-ever cloud computing deals with the Spanish-language broadcaster Univision by bundling its cloud computing services with benefits in its search, advertising and YouTube businesses. Tech reporter Aaron Tilley joins host Amanda Lewellyn to explain why some lawmakers are raising questions about the practice.

If you updated to iOS 14.5, you might have noticed the apps on your iPhone asking for permission to track you. That is due to a new feature called app tracking transparency, or ATT, that has sparked a backlash from developers and advertisers that depend on such data. Senior Personal Tech Columnist Joanna Stern sits down with Apple's software chief, Craig Federighi, to discuss the change and the debate it has stoked.

Looking for more episodes? Find them wherever you listen to podcasts.
Subscribe
Apple PodcastsGoogle PodcastsSpotifyiHeartRadioStitcherTuneInAmazon MusicAlexaRSS

One of the original business news podcasts. Mirrored after the popular Wall Street Journal column. Get caught up on your commute Monday through Friday. Listen as our journalists cover top stories and share timely insights on business, the economy, markets, and politics.
Subscribe
Apple PodcastsGoogle PodcastsSpotifyiHeartRadioStitcherTuneInAmazon MusicAlexaRSS

Speed through top news in a flash. Get the most important stories you need to know from The Wall Street Journal three times daily. Whether it’s the latest on the economy, news from Silicon Valley or closing numbers from Wall Street, stay in the know during your weekday commute.
Subscribe
Apple PodcastsGoogle PodcastsSpotifyiHeartRadioStitcherTuneInAmazon MusicAlexaRSS

The most important stories, explained through the lens of business. A podcast about money, business and power. Hosted by Kate Linebaugh and Ryan Knutson. The Journal is a co-production from Gimlet Media and The Wall Street Journal.
Subscribe
Apple PodcastsGoogle PodcastsSpotifyiHeartRadioTuneInStitcherAmazon MusicAlexaRSS

Your must-listen for valuable money and market stories from The Wall Street Journal. Each weekday our journalists from Heard on the Street, the Intelligent Investor and other popular features share insights on investing, markets, taxes and retirement planning.
Subscribe
Apple PodcastsGoogle PodcastsSpotifyiHeartRadioStitcherTuneInAmazon MusicAlexaRSS

From the award-winning opinion pages of The Wall Street Journal, Paul Gigot, Kim Strassel and Bill McGurn discuss the latest from Washington. Get critical perspective and the analysis you need on developments from the nation’s capital. Join them every Tuesday, Wednesday and Friday.
Subscribe
Apple PodcastsGoogle PodcastsSpotifyiHeartRadioStitcherTuneInAmazon MusicAlexaRSS

WSJ’s The Future of Everything

Discover what comes next with this in-depth look at how science and technology are revolutionizing the way we live, work and play. Join our award-winning team of journalists as we crisscross the country to interview the leaders and luminaries reshaping our world.
Subscribe
Apple PodcastsGoogle PodcastsSpotifyiHeartRadioStitcherTuneInAmazon MusicRSS

How do you make sense of a business landscape—and a world—that's experiencing profound change? This podcast series focuses on the importance of using alternative data, powerful critical thinking and deep research to help corporate leaders and investors understand the economic picture. wsj.com/ubs-futureworld
Subscribe